Veterans fought for our democracy. Now, they face fights against their own government 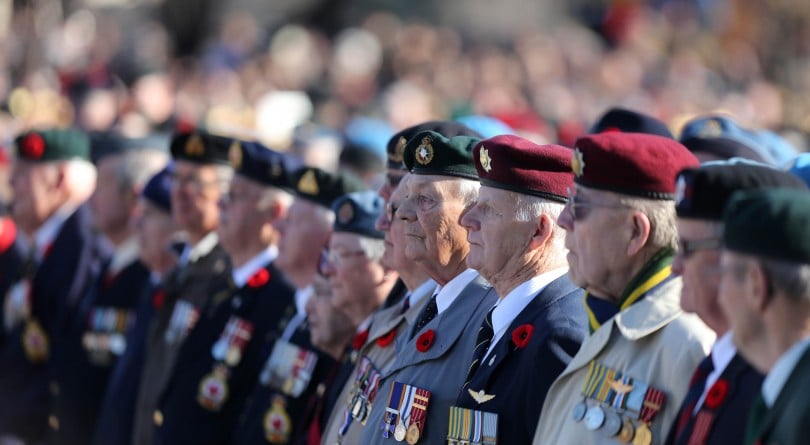 Sean Bruyea is a frequent commentator and author on veterans and military culture. He is also a retired Air Force Intelligence Officer. Disclosure: He is currently suing Veterans Affairs minister Seamus O’Regan for defamation.

Every Remembrance Day is a brief opportunity to consider the reality that just one segment of our population is obligated to fight—putting their lives on the line—to defend our democratic values. It’s just one day, but it is so widely recognized by Canadians across the country, drawing our politicians to solemn ceremonies to honour the fallen, that it might seem scandalous to suggest that Canada’s military members have returned home only to need to fight again for our national values—with their foe, this time, being their own government.

Sadly, it is hardly seen as a scandal. In fact, it’s been an ongoing narrative more than a decade old, kept secret by a number of successive governments.

READ MORE: How Maclean’s is honouring the 66,349 Canadians who died in the First World War

It began in 2005 under the Liberal government of Paul Martin. Returning from Victory in Europe celebrations, Martin and his veterans affairs minister, Albina Guarnieri, stick-handled the three opposition leaders—the Conservatives’ Stephen Harper, the Bloc Québécois’ Gilles Duceppe and the NDP’s Jack Layton during the plane trip home. The four agreed to alter the government’s injured-soldier compensation plan that had been in place since the War of 1812—which is when Canada began paying lifelong tax-free pensions for lifetime military injuries—and replace it with the so-called “new veterans charter” that would institute a one-time lump sum payment instead, and to ram this legislation quickly through Parliament with virtually no debate.

Leaders of six veterans’ organizations were sworn to confidentiality and agreed to support the legislation without seeing or knowing the details until 48 hoursbefore legislation was tabled in Parliament. The overwhelming majority of these groups’ veteran members were World War and Korean War veterans, who would continue to receive lifelong pensions; the new veterans program, which would provide less for future generations, did not affect them.

Despite last-minute interventions by a handful of veterans, led by me, the charter passed. But veterans began to take notice.

READ MORE: Search our database of fallen Canadians in WWI

Over the next 10 years, the lump-sum program became a lightning rod for growing veteran disaffection. In 2010, it sparked the explosive exit of the first veterans’ ombudsman. A national scandal erupted when my private medical and financial information would be distorted and then widely shared by bureaucrats and politicians, resulting in a rare government apology. And the veteran outcry that year would result in the first nationwide veterans’ protest since the First World War.

By the 2015 election, Canadians were aware of Canada’s mistreatment of our veterans and most political parties had platform planks geared to veterans. And there were hopes that Justin Trudeau’s Liberals, which swept to power with a platform that included a number of promises to veterans, would change things for the better.

That hasn’t happened—and if anything, things have gotten even less transparent.

READ MORE: Harjit Sajjan to soldiers and veterans: ‘Please know your sacrifices are not in vain’

A 2016 bill boosted the lump-sum amount, among other measures, but it was quickly wrapped up in a budget omnibus bill with no debate or committee hearings in the House of Commons. A Senate subcommittee did hold two hearings, albeit short ones—but the Senate passed the legislation unchanged.

The following year, the Trudeau government rolled out its delivery of another campaign promise: post-secondary education for any veteran who wanted it, the first meaningful universal veteran program since the Second World War. But it had many flaws: a plan excluding 99 per cent of veterans including the most disabled and destitute is hardly universal. And it was wrapped up in another budget omnibus bill, meaning it did not receive debate or hearings in the House of Commons. The Senate took a cursory glance, but passed it unchanged.

Trudeau has since debuted his cornerstone election promise: reinstating those lifelong pensions for injured veterans. But when legislation was introduced, it too was hidden in a budget omnibus bill with—you guessed it—no debate or committee hearings in the House of Commons. And the single Senate hearing (which included just one veteran) noted widespread discontent with the proposed “Pension for Life”: it was nothing more than the lump sum, annuitized over time. It passed the upper chamber unchanged.

While new laws require regulations that flesh them out, and Ottawa requires the public have an opportunity to scrutinize proposed regulations, the public was not permitted to make public comments around the post-secondary education benefit and the Pension for Life. We don’t know why, either, because Trudeau invoked Cabinet confidence, which privileges and classifies that information for 20 years: “Cabinet may exempt regulatory proposals from pre-publication on a case-by-case basis, and the specific rationale for exempting pre-publication is protected under Cabinet confidence,” Veterans Affairs media relations said in a statement about both the benefit and the pension. And for the first time, bureaucrats hid all the numbers, even as Minister of Veterans Affairs Seamus O’Regan claims that the Liberals are committing $10 billion to new veterans’ programs—a number we can’t fact-check because his department refused this summer to provide details in the proposed regulations as to how much money will be spent and how many veterans will be affected under the new programs.

Remembrance Day should be about honouring the sacrifice involved in preparing for and fighting battles in faraway places against regimes that deny the democratic rights you and I take for granted. Unfortunately, on the other days, it’s too easy to ignore that veterans are forced to fight even once they’ve returned—but this time, against their own government, who should be upholding that same democracy they defended.